Showing posts from March, 2016
Show all

Via Rider Magazine : Magical Riding in Northern New Mexico Every bend in the road in northern New Mexico seems to reveal another geological intrigue. en · chant (verb): To place under a spell as if by magic. Yep. That’s exactly what the mountains of northern New Mexico have done to me. There is something magical about this state, and I believe it stems from its wide-ranging diversity. The cultural, architectural and environmental palate from which this region is painted is as multi-hued and vibrant as you will find anywhere in the world. And no, that’s not hyperbole. Ascending to Enchantment on the 64 Worshipers have been walking through the doors of El Santuario de Chimayó for more than 200 years. As I pull out of the village of Chama in extreme northern New Mexico, my knowledge of U.S. Route 64 is limited to the attractive curves on my folded map. When the three dimensional version of the ribbon of tarmac comes to life under the wheels of my BMW R 1200 GS, the magic begins. The
Post a Comment
Read more

Gravel? You Can Count on It.

Gravel? You Can Count on It. : Over the years, I have learned there are a handful of things that can make even the most experienced riders immediately uncomfortable. The unexpected appearance of gravel on a curve is one of them. Some riders have told me that even a little gravel in a corner has triggered them to stiffen at the controls and ride straight out of a turn. Minimizing such extreme reaction to the sudden appearance of an unpleasant condition begins by anticipating it in advance and having a planned response. Will there be gravel in the curve ahead? Count on it. Will we have a strategy to deal with it? When it comes to gravel, count on it. Quite literally. This time of year, after a long winter of precipitation, washouts and snow plowing/salting, you can expect to see more gravel—especially on those back roads we all enjoy so much. As always, ride only as fast as you can see, asking yourself if you could safely and comfortably slow the motorcycle in the space you have ahead s
Post a Comment
Read more 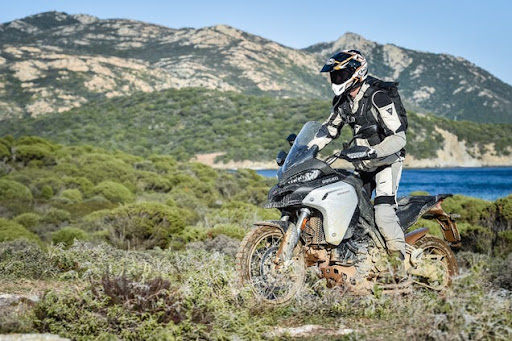 Help Me Understand The Adventure Bike Thing : It’s time to have a little talk. Again . I’ve come to realize that, despite my best efforts, I just don’t get the adventure bike thing in the way that convinces riders of the BMW GS, KTM 1190, Triumph Tiger and more to spend so much freaking money on these things. I’m going to need you to explain it to me. Read more... (Via Lanesplitter )
Post a Comment
Read more

Via Motorcycle.com : 2016 Moto Guzzi V7 II Stone Review 2016 Moto Guzzi V7 II Stone Editor Score: 76.25% Engine 16.0/20 Suspension/Handling 10.5/15 Transmission/Clutch 6.5/10 Brakes 7.25/10 Instruments/Controls 3.75/5 Ergonomics/Comfort 7.75/10 Appearance/Quality 9.0/10 Desirability 8.0/10 Value 7.5/10 Overall Score 76.25/100 Moto Guzzi is a brand unlike any other. Now in its 95th year of uninterrupted production, Guzzi remains entirely authentic in its retro appeal. Some other manufacturers resort to conjuring up a pseudo historical style and attempt to breed in some characteristics of yesteryear. But Moto Guzzi does not. And not Harley-Davidson, either, which has truckloads of its own history. And this brings me to a not entirely original analogy: Moto Guzzi is the Italian version of Harley. Long heritage of charming air-cooled V-Twins with pushrods: check. Fervent devotion to a historic brand: check. Ardent respect for nationalist design: check. Huge success all over the globe:
Post a Comment
Read more 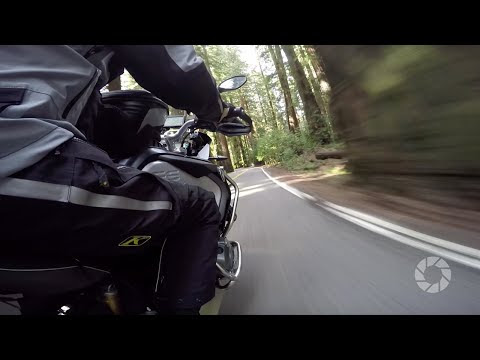 Mike is going over his photography gear he's taking along while on his "world tour." Lots of good advice and usable tips here.  A bit overkill for me - keep in mind he shoots video for Adorama TV, so he might pack stuff you would not typically take on tour. In fact, I will create a similar video to go over my own  philosophy and gear when touring, now that I take pro stuff along (Sony Alpha 7 R Mark ii)... In the meantime, enjoy Mark's video below.
Post a Comment
Read more

A Practice Guide for Braking

Via Cycle World : A Practice Guide for Braking   YCRS instructor/owner Chris Peris caught entering Barber’s Turn One. The rear is just lifting off the ground as Peris approaches maximum brake pressure. Read below the practice step Peris follows to remain calm while piloting the Army of Darkness BMW to two consecutive WERA national championships. On a bike this fast, an intimate relationship with the brakes is mandatory! (Photo by BMW Owners News)   Last week while standing on the Inde Motorsports Ranch asphalt watching riders approach during the Yamaha Champions Riding School (YCRS) braking practice session, it occurred to me how poorly most riders brake. To be more precise: how poorly most riders perform during an emergency stop. Very few even get close to the bike’s maximum stopping potential until well into the drill.  As I watched, I realized that even if some of our students habitually practice braking as they claim, they may not have a set procedure to practice. This co
Post a Comment
Read more

Via Rider Magazine : 2016 Yamaha FJR1300A/FJR1300ES – First Ride Review A host of smaller upgrades add up to a substantially improved FJR1300 for 2016. (Photography by Brian J Nelson) “14 years of refinement” doesn’t exactly sound like an earth-shattering tagline, but that’s what Yamaha led with at its press briefing for the new 2016 FJR1300A and ES models in Phoenix, Arizona. To be fair, that’s a fitting description: the FJR1300A (read about the ES in the accompanying sidebar below) doesn’t boast any major redesigns, but instead receives a barrage of smaller upgrades and refinements, the sum of which adds up to a substantially improved motorcycle. And they’re on the right track. Especially notable for 2016 is a new sixth speed to help smooth out top gear cruising, while a new assist-and-slipper clutch uses engine torque to reduce clutch engagement force, making for easier cog swaps. While the conventional 48mm fork remains on the FJR1300A, the fork and shock manufacturer is now KYB
Post a Comment
Read more

Via Motorcycle.com : 2017 KTM 1290 Super Duke GT Video Review If you saw my text review of KTM ’s new SD GT , you witnessed an old grown man gush about a new Austrian motorcycle. If I had to choose a bike to ride across this vast country to a trackday, it’d probably be this one. Read more...
Post a Comment
Read more

IENATSCH TUESDAY: Getting Sideways and Sliding Safely On Skidbike mistakes can be made large and small, but without the penalty of pain.

Via Cycle World : IENATSCH TUESDAY: Getting Sideways and Sliding Safely On Skidbike mistakes can be made large and small, but without the penalty of pain. Remote-controlled hydraulics lift and lower the front and back of the bike, removing and adding grip. A few clicks of the remote changes the bike from “hooked up” to “black ice covered in Vaseline.” If you have ever attended a performance-driving school you probably slid around in a Skidcar. It’s usually a rear-drive car mounted on a four-wheeled platform that can raise and lower the car to simulate a loss of front or rear traction. Some schools set up figure-eight courses with cones you can knock down when you lose control; the instructor sits in the right seat and raises and lowers the car. It’s humbling, a riot, and you learn a lot. Read more...
Post a Comment
Read more

Introducing the Lazareth LM 847: The 4-Wheel Motorcycle You Never Knew You Wanted

Via Motorcycle.com : Introducing the Lazareth LM 847: The 4-Wheel Motorcycle You Never Knew You Wanted MO readers tend to be pretty vocal when it comes to our three-wheeler tests, insisting that only two-wheelers count as motorcycles and three wheels should be saved for sidecars or the trash bin. If that’s the case, then what do you make of this, the Lazareth LM 847? A symbolic middle finger to those who stick to conventional definitions of motorcycles and what motorcycling should be, creator, builder and mad man Ludovic Lazareth debuted the LM 847 recently at the Geneva Auto Show. Read more...
1 comment
Read more

Ride Review: The 2016 Ducati XDiavel Is A Weird But Intriguing Italian Cruiser 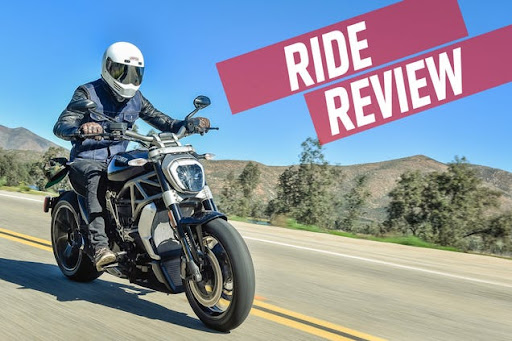 Via Lanesplitter : Ride Review: The 2016 Ducati XDiavel Is A Weird But Intriguing Italian Cruiser Ducati’s first attempt at a cruiser, the original Ducati Diavel, was a lot of things—but it just didn’t have what people wanted from a cruiser. While it sold fairly well, Ducati felt like there was more of that XL-sized cruiser segment to be had. The XDiavel is Ducati’s attempt to embrace the cruiser spirit while keeping some of the Ducati ethos. Read more...
Post a Comment
Read more

Via Cycle World : IENATSCH TUESDAY: Street Riders Only Track Clinics There are several reasons riders haven’t taken a school: ChampStreet addresses them. : Two and a half years ago, I became an owner of the Yamaha Champions Riding School after five years of working as an outside contractor for Miller Motorsports Park. That adds up to over seven years of continually tweaking a riding school that evolves with every class we teach. Our tweaks and adjustments come from graduate comments. About four years ago a theme began to emerge: “How about an inexpensive street-riders-only track clinic?” Read more...
Post a Comment
Read more

Quick tutorial on how I use Garmin Basecamp to plan my tours...
1 comment
Read more
More posts