U.S. Route 281 is the only continuous three-digit U.S. Route to extend from the Canadian border to Mexico. (Map by Bill Tipton/compartmaps.com)

Riders brag about their coast-to-coast exploits—how many times, how many days, how many hours. I’ve been across the country 21 times myself. Seeking a new direction, I asked myself how many of us have been north to south, border to border. Not me. I intended to address that oversight by riding from Tsplitting the country in half in the process. 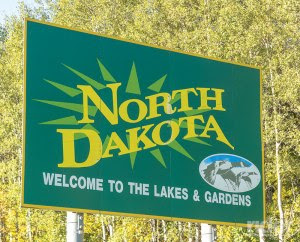 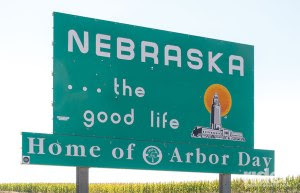 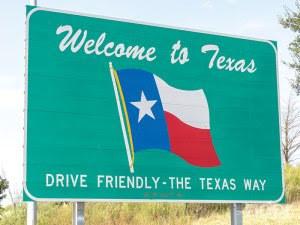 I rode 2,000 miles from Albany, New York, to the International Peace Garden through Dunseith, North Dakota, gateway to the Turtle Mountains. I paused at a giant turtle made completely of wheel rims, an appropriate monument alluding to the locale. The colorful floral park that is the International Peace Garden provided scenic jaunts and serene camping. 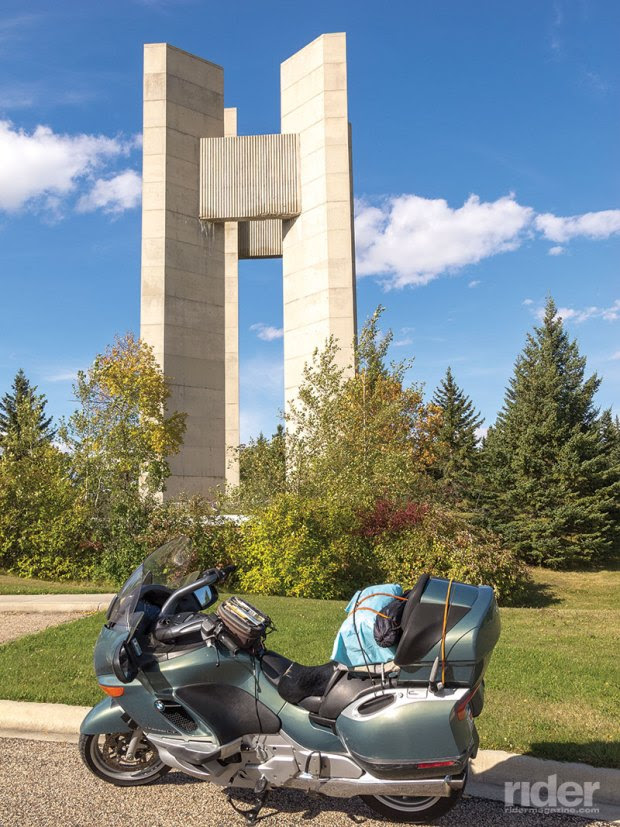 The Peace Towers at the International Peace Garden rise 120 feet in the air, symbolizing the corners of the earth reaching common understanding. (Photos by the author)

U.S. 281 led me south 14 miles back to Dunseith, then it proceeded east 40 miles before bending on its progressive downward projection. The first significant town I entered was Cando, billing itself as the “Duck Hunting Capital of North Dakota.” They make that claim, I surmise, because of the town’s proximity to the numerous saw grass-rimmed prairie pothole lakes that are filled with said ducks. These glacier-scoured ponds pocket the landscape, enhancing the otherwise unremarkable scenery. There was a steam thresher reunion in progress as I entered New Rockford. Towns such as this provide interest between stretches of unwavering U.S. 281. Jamestown diverts with the World’s Largest Buffalo Monument, standing 26 feet tall. I found two albino bison at the nearby National Buffalo Museum more intriguing. White buffalo are sacred to the Lakota Sioux, who inhabit the Dakota plains.

I also learned in the Frontier Village that Jamestown was the home of prolific Western author, Louis L’Amour, and a collection of his books is on display. I think I’ve read most of them. 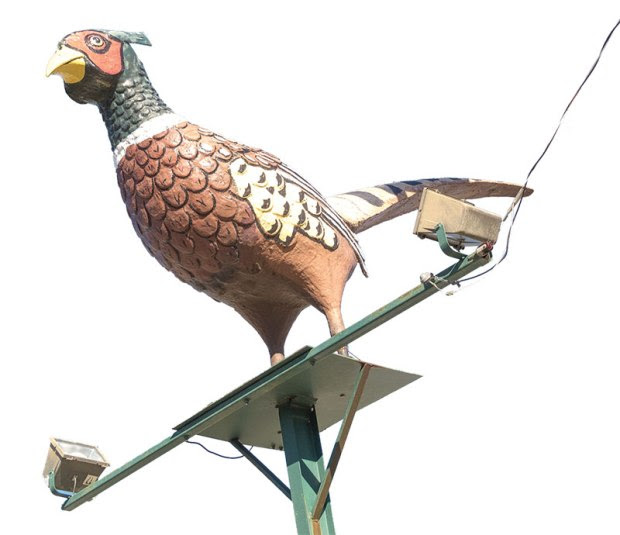 By the time I made South Dakota, my boots were smeared with splat from grasshoppers playing their version of tic-tac-toe as they make impact. A persistent headwind was also diminishing my fuel mileage from an average of 50 mpg to 45 mpg. Sunflowers bent under the gusts. In my observation, the Dakotas have at least as many sunflower fields as Kansas. I decided to bed down at a Super 8 in Aberdeen, where the chain was founded in 1974 (and there are three locations there). 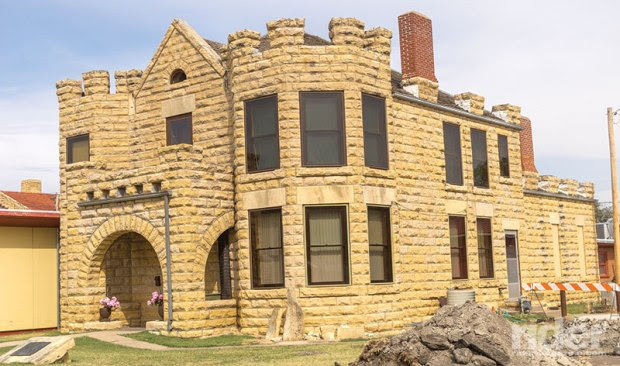 The Fossil Station Museum in Russell, Kansas, is built of post rock limestone, and once served as the sheriff’s office and county jail.

As I rode, I noticed that every town has a water tower, some with interesting graphics. The one in Redfield proclaims itself the Pheasant Capital of the World with an accompanying mural of the bird. Likenesses of them even perch on posts downtown. Welcoming banners are tethered to poles here and elsewhere. Co-op granaries along railroad sidings are another identifying feature of each town along this route. 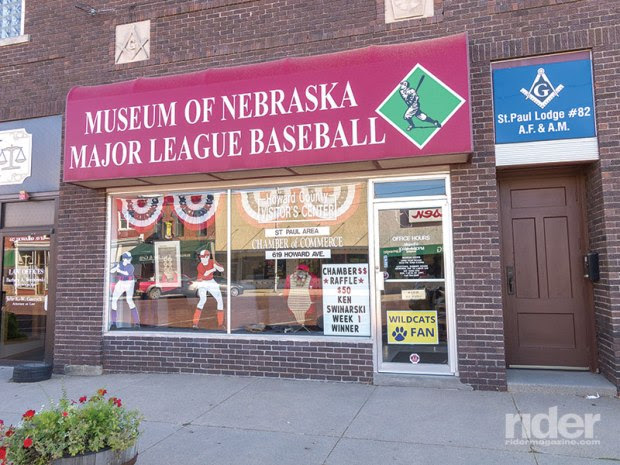 St. Paul, Nebraska, was the hometown of baseball Hall-of-Famer Grover Cleveland Alexander, reason enough to start a museum honoring other cornhusker contributors to the sport.

I crossed the wide Missouri River at Pickstown and headed into Nebraska. At the intersection of U.S. 281 and U.S. 20 in O’Neill is a giant faded green shamrock, marking this town as “Nebraska’s Irish Capital.” Turns out it was the first parish of Father Ed Flanagan, of Boys Town fame. I parked and unwittingly stepped upon a marked Blarney Stone on the corner to take a picture, and was promptly vilified for this sacrilege. “Hey, my BMW is green,” I announced, to no avail. 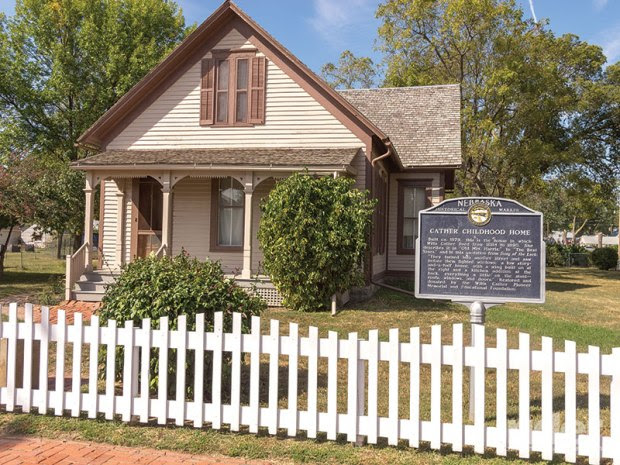 Pulitzer Prize-winning novelist Willa Cather described her childhood home in Red Cloud, Nebraska, as “…everything a little on the slant.”

I fled town, entering corn and wheat fields and a vast empty road stretching ahead like a plumb line. Some 90 miles later in St. Paul, I discovered a baseball museum of sorts, honoring Hall of Famer Grover Cleveland Alexander, a hometown boy. Henry Fonda grew up in Grand Island, my next stop, a three-time recipient of the All-American City Award. Just south of town, I visited the Stuhr Museum of the Prairie Pioneer, on extensive grounds showcasing gardens, a railroad display, Pawnee earth lodge, antique auto and farm machinery and a small village. The Mormon and Oregon Trails passed this way along the nearby Platte River, which I soon crossed. 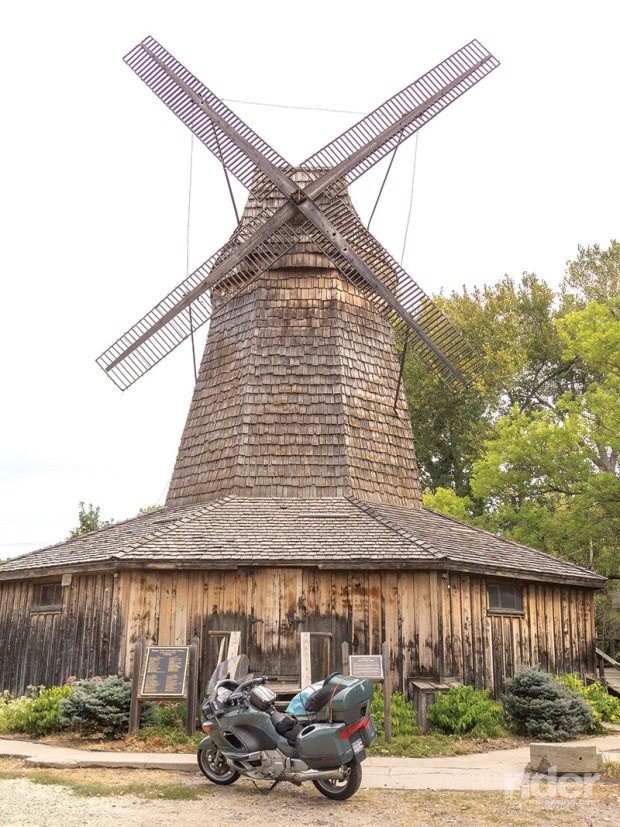 The Old Dutch Mill in Smith Center, Kansas, was built by a German immigrant in the 1870s to grind corn and wheat.

U.S. 281 entered the Republican River Valley of breeze-swept wildflowers and grasses. Pulitzer Prize-winning novelist Willa Cather memorialized the prairie she so eloquently wrote about with an apt metaphor: “…there was so much motion in it; the whole country seemed, somehow, to be running.” I entered Cather’s childhood home of Red Cloud, whose preserved buildings give the town that turn-of-the-century look described in her tales, such as O Pioneers!. 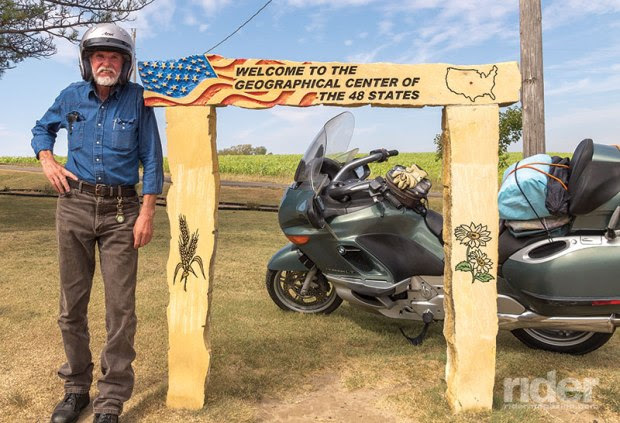 After visiting Cather’s childhood home, I crossed the border into Kansas and the geographic center of the contiguous U.S., just outside of Lebanon. This isolated spot entices with a shaded park and tiny chapel to set the mood for reflection. I’ve ridden to the four corners of the nation, and now the center, all worthwhile endeavors in their own rights.

The Old Dutch Mill is the point of interest in Smith Center. I gained momentum on the drop south. The road cuts through hills, exposing limestone jutting out in layers that are harvested to use as fence post rocks. Lucas is the center of this area, with a post rock garden and other grassroots art. Russell also lies in the heart of this country, and displays its historical highlights with a unique mural-sized black and white pictorial, which depicts likenesses of hometown heroes Senators Bob Dole and Arlen Specter. Interesting rock art and architecture abounds, such as the Fossil Station Museum, constructed of post rock limestone and resembling a turreted prison; indeed, it housed the former sheriff’s office and county jail. 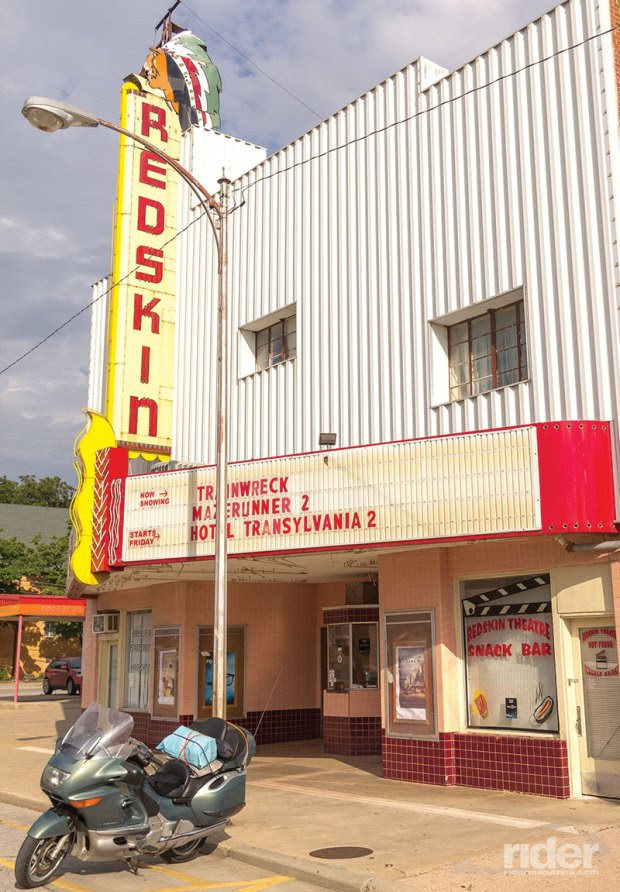 Marquee at the local theater in Anadarko, Oklahoma, “Indian Capital of the Nation,” sends a message the politically correct might note.

I embraced a section of winding road entering Hoisington and noted the numerous metal silhouette pole art. The breeze hadn’t subsided any, demonstrated by the steady whirligig blades of a wind turbine forest I encountered outside of town. Ten miles farther on lay Great Bend, named for its location on the Arkansas River. Truman Capote’s In Cold Blood was partially filmed here. Medicine Lodge claims the home of Carrie Nation, the ax-wielding temperance lady of yore. Adjacent to her home is the Stockade Museum, displaying a rare two-story log cabin built in 1877 and a grim strap-iron jail.

Entering Oklahoma, the terrain turned hilly, but the road conforms by going up and down, not by curving around. At this point, the wind had abated and I could at last forgo the countersteer lean. I needed to make a 40-mile detour to Oklahoma City for an oil change. The expensive bill startled me because the cost of BMW’s
latest oil blend, at least here, has risen to $18 a quart. Sorry, BMW, but it is Mobil One from here on out. 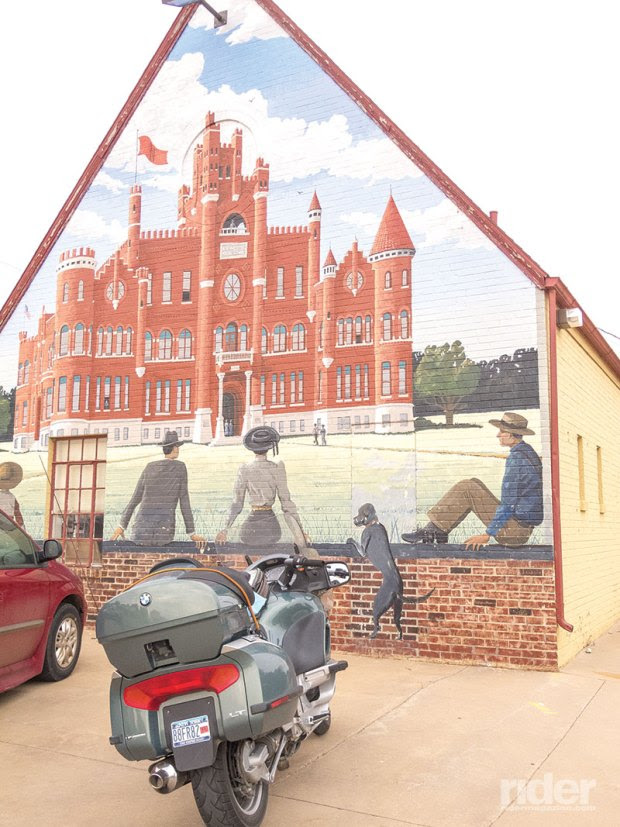 Numerous murals grace buildings in Alva, Oklahoma, this one honoring the town’s former Northwestern Oklahoma State University campus, modeled after a Norman castle, which burned down in 1935.

I rode along parts of the old Chisholm Trail to Hinton, where I dropped into Red Rock Canyon State Park via a steep, hairpin road. This turned out to be a hidden chasm sliced by a spring-fed creek that flows through a meadow beneath red sandstone cliffs. Unfortunately it was raining, and instead of camping there I exited to seek shelter for the night. I located the Hinton Country Inn and was amazed to find within an antique-filled anteroom crowded with vintage Ducatis and Moto Guzzis. Proprietor Dave is a golden-bearded bear of a man who has collected Italian steeds throughout his life, and will happily relate the history of each one. 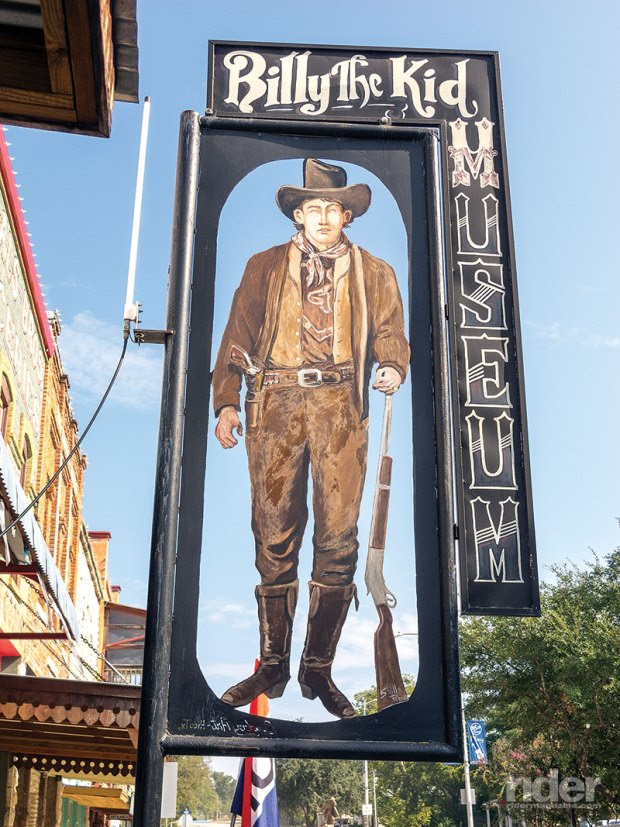 Hico, Texas, has the flavor of an old Western town and will regale you with tales of how Billy the Kid actually died there.

Forty miles south of Hinton is Anadarko, the self-proclaimed Indian Capital of the Nation. More than 40 percent of the townspeople are Native Americans. During the 1800s, the Cherokee and other affiliated Eastern tribes were primarily relocated to Oklahoma. They’ve established a National Hall of Fame for Famous American Indians and a Southern Plains Indian Museum. Their local theater is named the Redskin. Ah, the irony! Another interesting aspect of Anadarko is that two-time AMA Grand National Champion Gary Nixon was born here. As I rode out I could envision a ghostly specter of him bounding over the red earth on his Triumph, gaining the expertise he employed so effectively on the flat tracks of the nation. 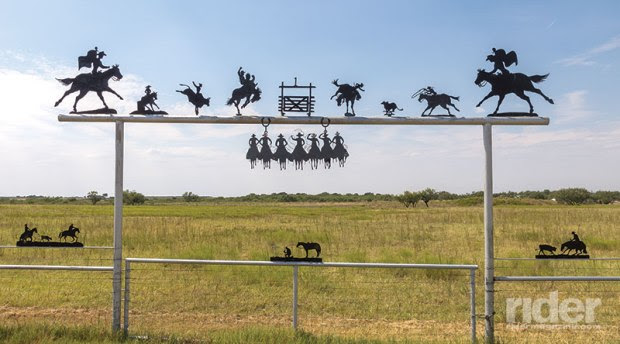 Welcome to a working Texas ranch.

I crossed the Red River into Texas. My research on this route didn’t come up with anything on the little town of Hico, so I was intrigued when I saw a sign announcing a “Billy the Kid Museum.” I located it on an authentic Western street with a promenade up the middle. An elderly gent watched me park and began a conversation before I had the sidestand down. He introduced himself as a retired curator of the museum, and he commenced to tell the tale. It seems his town makes the case that Billy the Kid was not killed by Sheriff Pat Garrett in 1881 in New Mexico, but died of a heart attack in 1950 on the streets of Hico in the guise of a local character named “Brushy Bill” Roberts. His grave in Hamilton, the next town south, serves as an exclamation point. It’s visible from U.S. 281, and among the mementos left in front of the tombstone are bottles and cans of Texas’ own Shiner Beer. It’s a mystery why. 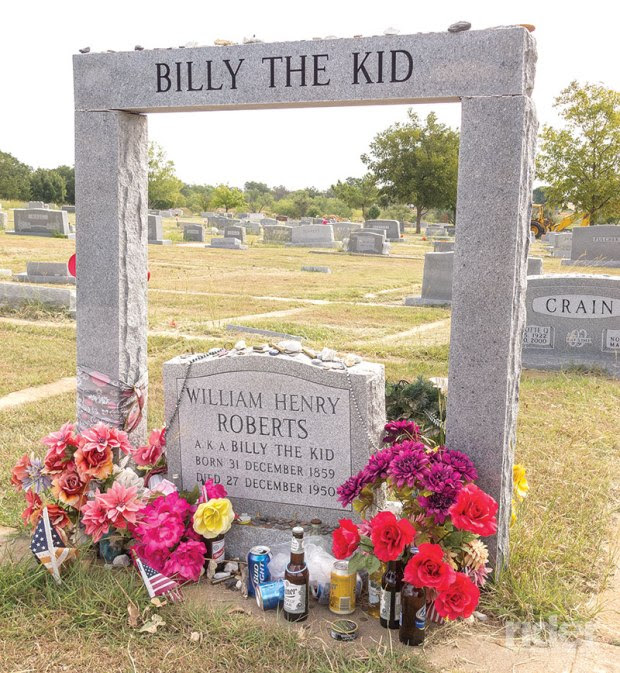 Just who lies here, “Brushy Bill” or The Kid? One or the other’s grave is in Hamilton, Texas.

U.S. 281 dumped me into downtown San Antonio, where the Alamo is located. My intent was to photograph the bike in front of the mission. Alas, a tile-lined plaza fronts the historic shrine and a significant crowd was sauntering about. Undaunted, I pulled up through the ropes onto the plaza…right in front of two bicycle cops. Thinking on my feet, I quickly asked where to find motorcycle parking. With stern expressions, they directed me to a nearby parking lot. 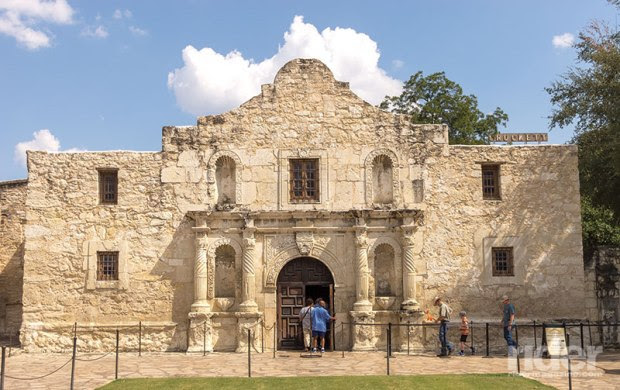 A Texas shrine, the Alamo, remains ever stalwart in downtown San Antonio.

On the 300-mile ride to Brownsville, the last 50 miles parallels the Rio Grande, and the route was crawling with troopers and border patrol. Such an anticlimactic finish 2,000 miles from the Canadian border! But having previously ridden the 900 miles from Beaumont to El Paso, and now the 600 miles from Wichita Falls to here, I can now say I’ve covered the length and breadth of the country and the length and breadth of Texas. And that, in itself, is an accomplishment. 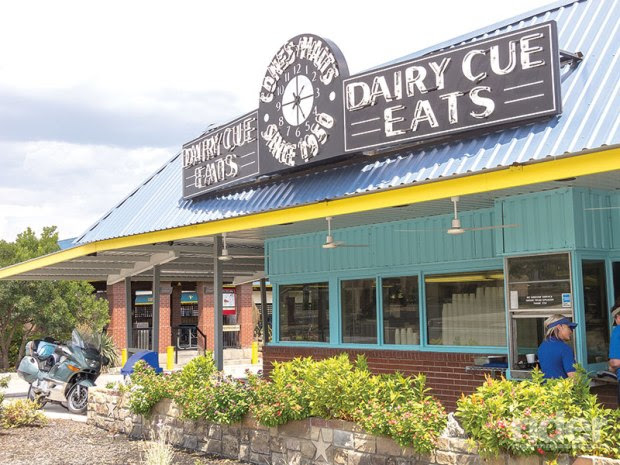 It’s said that this diner in Lampasas, Texas, was a favorite hangout of Elvis Presley when he was stationed in nearby Fort Hood.

After accumulating 54,000 miles on a succession of Nortons in his early years of riding, author Alan Paulsen racked up 151,000 miles on a Suzuki GT750 Water Buffalo. Then, as a staff member with Rider, he reviewed the new Yamaha Venture Royale for the May 1983 issue, and subsequently put 20,000 miles on another ’83 Venture in eight weeks. Having grown comfortable with the bike, he got an ’84 of his own, which now has 172,000 miles on it and counting.