Precious Cargo: The Art of Carrying Stuff on a Motorcycle

Precious Cargo: The Art of Carrying Stuff on a Motorcycle: 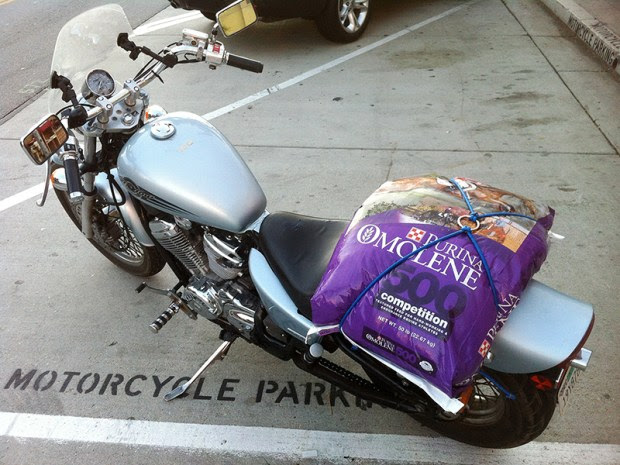 This guy has a 50-lb bag of dog food strapped to the passenger seat of his 500-lb Honda Shadow.

Recently I order a half-case of wine on the Internet, and the six bottles were delivered in a large box to our office via UPS. My daily round-trip commute is about 50 miles, and I won’t drive my car unless both my legs are broken, so the challenge was to figure out how to carry the bulky, 24-pound box full of precious cargo on the back of the bike.

Our long-term Yamaha FJR1300ES has rigid, removable saddlebags that hold 30 liters apiece, but I wasn’t about to risk putting three clanking bottles of wine into each saddlebag, nor having the bottles come tumbling out when I opened the clamshell bags when I got home. 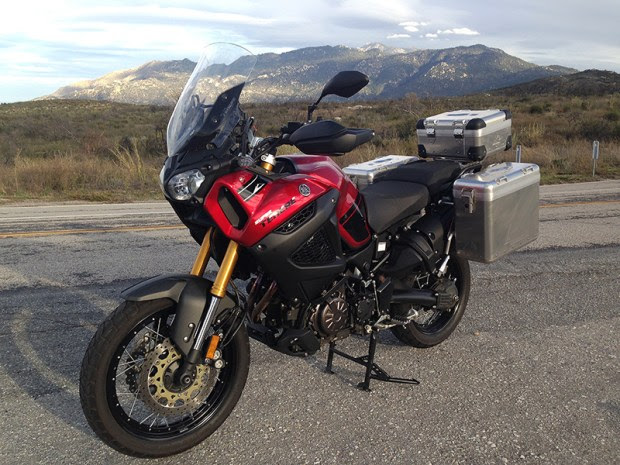 Carrying fragile cargo requires care and finesse. Last summer I transported 15 bottles of wine on our long-term Yamaha Super Ténéré ES, which was equipped with aluminum, Touratech-made panniers and top trunk. Three bottles, nestled inside a special cardboard carrying box, fit perfectly in the trunk. After tearing the cardboard box that held the 12-bottle case into small pieces, I layered the cardboard strips and extra shirts between six bottles laid horizontally in each pannier. With cheeks clinched, I cautiously rode 75 miles home, fretting obsessively about opening each pannier lid to find the metal boxes filled with broken glass, soaked cardboard, wet T-shirts and $200 of undrinkable wine. But all of us—wife, me and 9 liters of primo vino—arrived safe and sound.

Back at the office, the half-case was already safely packed in a cardboard box for shipping, so I used two ratcheting tie-down straps to secure the box to the FJR’s back seat. For extra insurance I also ran a ROK Strap over the top of the box and another ROK Strap around the tie-down straps to keep them taut, and home I went. Success. 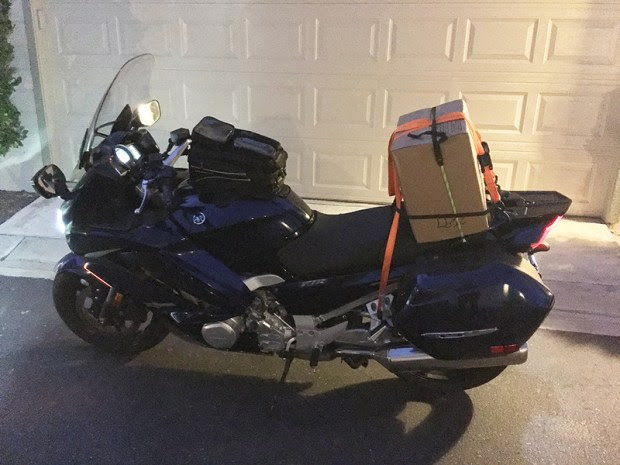 The 30-liter, side-opening saddlebags on the Yamaha FJR1300ES weren’t the best means of transporting the precious cargo. Two ratcheting tie-downs and two ROK Straps did the trick.

Trying to carry loads that are ridiculously large or heavy on a motorcycle is dangerous, and dumb. But since many motorcycles have load capacities that exceed 400 pounds, it’s perfect acceptable to carry as much weight as is allowed, as long as it’s properly balanced and secured.

I got my first experience with carrying stuff on a motorcycle back in the late ’90s, when I lived in downtown Philadelphia. I never had a car while living there, and during my first couple of years, when I needed to go shopping I’d push a granny cart with two wobbly wheels about 12 blocks to the nearest grocery store. Then I got smart and bought my first motorcycle, a used Yamaha FZ750 sportbike. I’d ride to the store, load groceries into a duffel bag slung over my shoulder and loosen the shoulder strap just enough to allow most of the weight to sit on the passenger seat during the ride home. 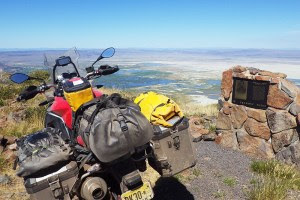 To carry gear, supplies and food for a weeklong trek on the Oregon Backcountry Discovery Route, I equipped the BMW F 800 GS Adventure with panniers, a tank bag, a duffel and two dry bags. 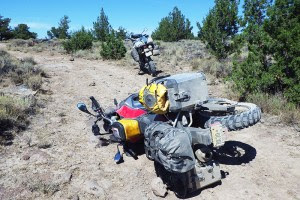 Tall seat + high center of gravity + rock garden = dirt nap. When your cargo is properly secured to the bike, it will (hopefully) stay put when you topple over.

Over the years I’ve carried plenty of people, packages and luggage on motorcycles. When it comes to cargo, depending on bungee cords can be a recipe for disaster because they’re not usually strong enough to keep weight from shifting around when going over bumps or leaning into corners. Bungee hooks aren’t especially strong, and attaching them to flexible turn signal stalks or anywhere near a hot exhaust is asking for trouble. Cargo nets are OK for light stuff, but for anything heavy they’re about as reliable as news stories on Facebook.

Out of desperation (and a lack of straps), I’ve balanced a few FedEx or Amazon boxes in my lap for short, in-town distances, but trying to carry loose items or anything that can interfere with steering, braking or other motorcycle controls is just asking to be nominated for a Darwin Award. Besides solidly mounted saddlebags or a trunk, having a luggage rack on the back of your bike provides a good place to carry items and have them be securely fastened to the bike. Remember when most folks just used a milk crate lashed to the rear of the bike?

This is a ROK Strap. I never leave home without a pair of these in my tank bag, saddlebag or backpack. The duffel and dry bags on the back of the BMW in the photos above were secured with ROK Straps.

I always keep a pair of ROK Straps in my tank bag, saddlebags or backpack. If you’re not familiar with ROK Straps, they’re a little pricey (about $22 a pair) but they’re the gold standard for securing something to your bike. Each strap has two parts—one part is a wide, stretchy bungee segment with a webbing loop on one end (for wrapping around a footpeg bracket, passenger grab handle, luggage rack or other solid part of the bike) and the female part of a quick-release buckle on the other end; the other part is a long strap made of non-stretchable nylon webbing that is adjustable for length, and it also has a webbing loop on one end and the male part of the quick-release buckle on the other end. 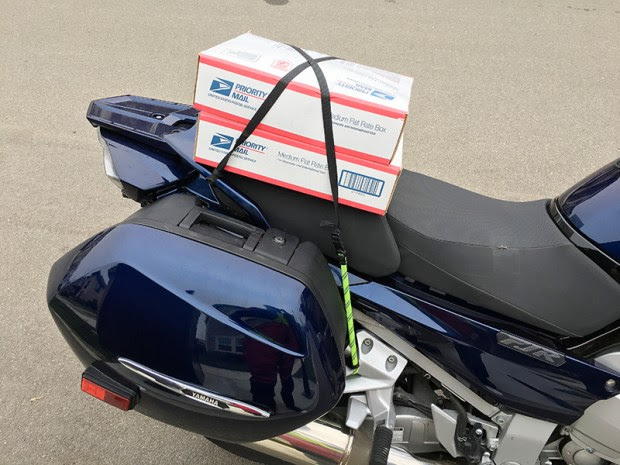 Santa’s helper: ROK Straps used to secure a couple of Priority Mail boxes to the passenger seat of our Yamaha FJR1300ES.

You secure the loops on opposite sides, you connect the two halves of the buckle and then you pull the adjustment strap. The bungee segment stretches to keep the adjustment tight, and believe me, you can really crank down on a ROK Strap and feel confident it will stay put. Usually I criss-cross two ROK Straps over a box so it can’t slide out, or with duffels I run them through D-rings or carry handles to add even more security. 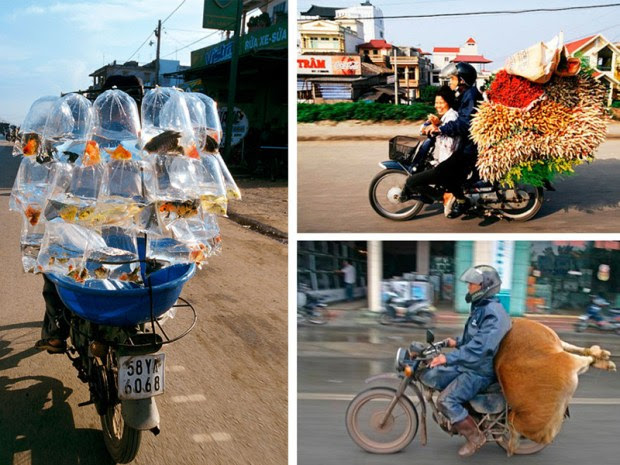 Photos from Hans Kemp’s book, “Bikes of Burden,” about the creative ways folks in Vietnam carry cargo on their small motorcycles. 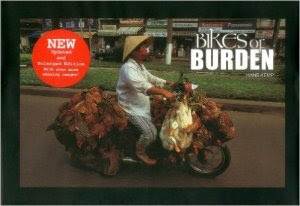 Of course, we Americans, with our big motorcycles and our high-dollar, purpose-built luggage and our DOT regulations, are generally good and safe and sensible when it comes to moto cargo. And when we have to carry something really big, we take our four-wheeled grocery getter, or we just use Amazon Prime to have it shipped to our front door. We have it easy. But in developing countries, where—for many people—the only reliable mode of transportation is a wheezy, smoky 50cc two-stroke motorcycle and transporting goods or family members from home to market or wherever is an economic necessity, carrying comically large and unwieldy loads on a small, underpowered motorcycle has risen to the level of acrobatic art form. For some entertaining examples, check out photographer Hans Kemp’s book, “Bikes of Burden,” which shows some very creative load-carrying in Vietnam, or just Google the phrase “bikes of burden” and then click on the Images tab. 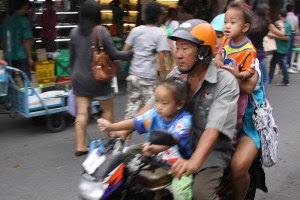 When I visited Bangkok, Thailand, in 2010, I saw this guy with his wife and two young daughters riding on a 100cc motorcycle. 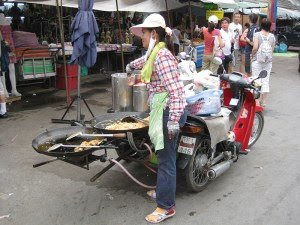 Wok-n-roll? A mobile food stand at a market in Bangkok, Thailand.

Part of the enjoyment of riding, for me at least, is the adventure. Sometimes you get cold, sometimes you get wet, sometimes you run out of gas and sometimes you have a big box that you absolutely, positively have to transport home. Because if I had left that box at the office, I would have been without wine. There’s no dignity in that.