A Kool Kruise to a Hip Town: New Hope, Pennsylvania

A Kool Kruise to a Hip Town: New Hope, Pennsylvania: 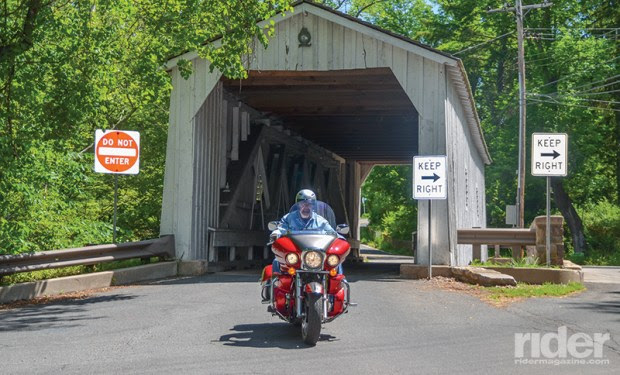 Ken thinking: “I look so cool, I am jealous of myself,” as he cruises through time on the 1872 Green Sergeant’s Covered Bridge, which crosses the Wickecheoke Creek. It is the last publicly owned covered bridge in New Jersey and is listed in both the New Jersey and United States Registers of Historic Places. (Photos by the author)

New Hope, Pennsylvania, is a popular destination for riders in the Northeast, not only because of its artistic vibe, galleries, restaurants, hip boutiques and 19th-century buildings, but also for the scenic roads that take you there. Sitting on the shore of the Delaware River across from central New Jersey’s historic Lambertville, riders have enough roads to explore for a day ride or even a multiday trip. You can also easily walk across the bridge to visit Lambertville. On weekends, New Hope fills up with thousands of people on both two and four wheels; visiting midweek lessens the street show but is far more relaxing. 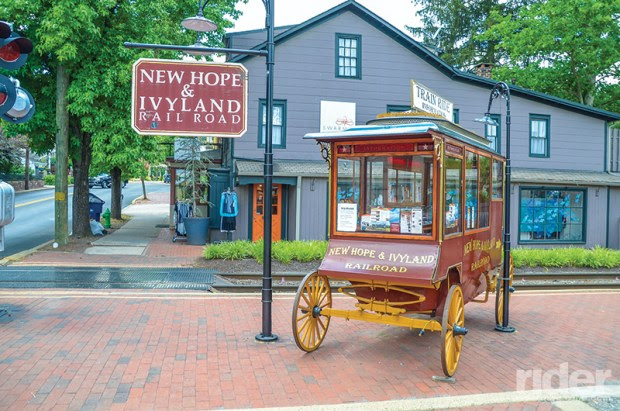 The New Hope & Ivyland Railroad offers scenic rides into countryside. An 1800-era stagecoach was the Uber of its day. This one serves as an informational display.

My friend Joe and I only had the day to visit, so we decided to leave from Oakland, New Jersey, and superslab it on Interstate 287, rather than take back roads both ways, which is more scenic but also more time consuming. So, in the words of Bob Seger, we “headed out on [our] big two-wheelers and just rolled that power on…and pretty soon my heart was singin’” as we thundered toward New Hope.

My Kawasaki Voyager 1700 ate up the highway and drank in the freedom of an open road with little traffic, while I enjoyed the lush wall of trees lining our route. Shortly after crossing I-78, we took U.S. Route 202 south to New Jersey State Route 12 and County Route 523. Neither of us had ever been on Route 523, and it proved to be quite scenic. 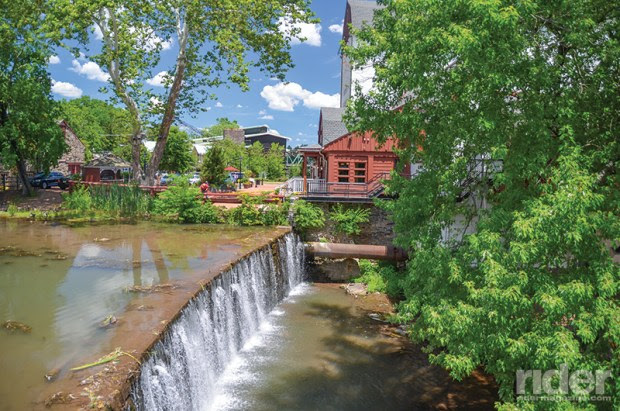 “Flow river flow, past the shady trees/Go river go, go to the sea” (Roger McGuinn/Bob Dylan, “Ballad of Easy Rider”). The spring-fed stream, known by the Lenni Lenape Indians as Aquetong Creek, flows at a rate of 2,000 gallons per minute through New Hope into the Delaware River.

Stopping at a farm stand, the owner suggested we go see the Green Sergeant’s Covered Bridge. Erected in 1872, it was fully restored with its original material in 1961, and is on the National Register of Historic Places. It is the last publicly owned covered bridge in New Jersey. Not shown on most maps, it is north of Stockton off Route 523 on County Route 604.

At Stockton, we rolled south on State Route 29 to Lambertville, crossing the bridge into New Hope, Pennsylvania. Incorporated in 1837, a hundred years ago New Hope was an industrial town with mills that employed hundreds of people. Over the last several decades, it has evolved into a tourist town, rich with 19th-century buildings, arts, theater, antiques, crafts, numerous restaurants and a strong sense of independence and nonconformity. Abbie Hoffman, a 1960s political activist and one of the founders of the radical Yippies Movement, eventually made his home in New Hope until he died there in 1989. 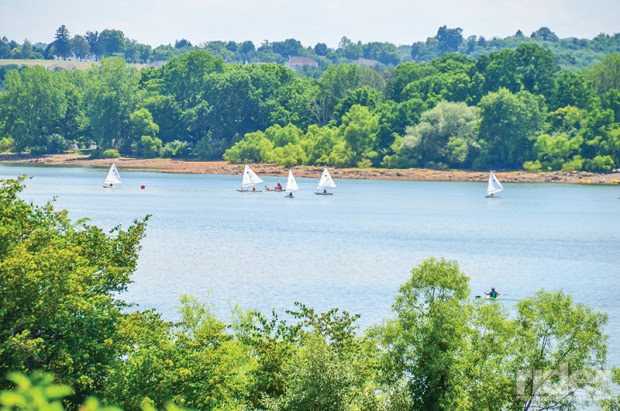 “Sailing takes me to where I’ve always heard it could be/Just a dream and the wind to carry me” (Carter Burwell). Sailboats on the Spruce Run Reservoir, Clinton, New Jersey.

We parked the bikes and had lunch at Fran’s Pub, which was delicious. Walking through the town, we enjoyed the stores and sights. Left over from the industrial era are the Delaware Canal, now a linear park for walking and bicycling alongside the canal, and the New Hope and Ivyland Railroad, which offers scenic rides. Taking in the views of the river and Lambertville from the Bucks County Playhouse Promenade made me think of tree-lined State Route 32 that snakes south along the Delaware River to Washington Crossing State Park. 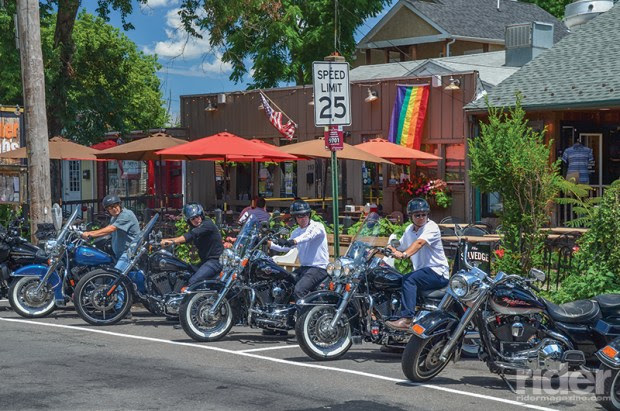 Riders on Main Street in New Hope getting ready to rock ‘n’ roll: “Flow river flow, let your waters wash down/Take me from this road to some other town” (Roger McGuinn/Bob Dylan, “Ballad of Easy Rider”).

The park commemorates the spot where General George Washington led his troops across the ice-choked Delaware River in a blinding snowstorm, and then marched on Trenton, capturing it from the Hessian soldiers. This resounding victory changed the fortune of the Continental Army, which led to independence.

With historic buildings, a visitor’s center, hiking paths and Bowman’s Hill Tower, it is worth the 20-mile round-trip ride from New Hope. If you are not claustrophobic, climb Bowman’s Tower, which has stairs and an elevator. It has been voted the best view in Bucks County, with a 14-mile panoramic vista; some say 40 miles on a really clear day. 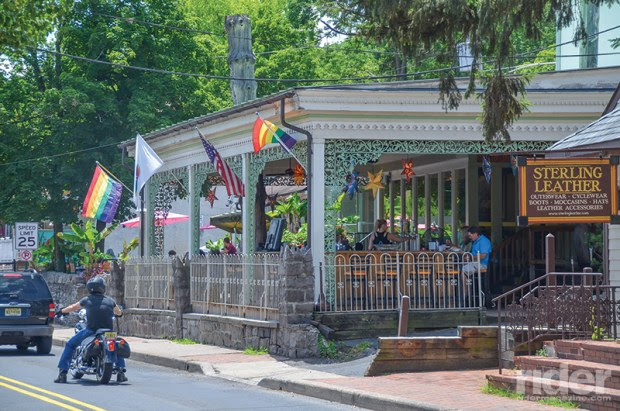 Unfortunately, Joe and I were pressed for time, so we decided to put it on our agenda for the next visit. We made it back to our bikes just as the parking meters ran out and parking enforcement went by. Abide the parking rules, because during the height of the motorcycle season, New Hope officials can be strict.

We saddled up and gave a good-bye salute to New Hope for another enjoyable visit and then rode north through the town on Route 32. Our plan was to take it as far north as the Milford crossing. This beautiful stretch of road snakes and rolls as it parallels the river, passing farms, homesteads and B&Bs. From Milford, New Jersey, we would normally take County Route 519 to the borderlands of New Jersey and New York, and then various back roads home. Route 519 is a premier road that serpentines through rural New Jersey. Even though it’s the longest route to New Hope, it is our favorite. 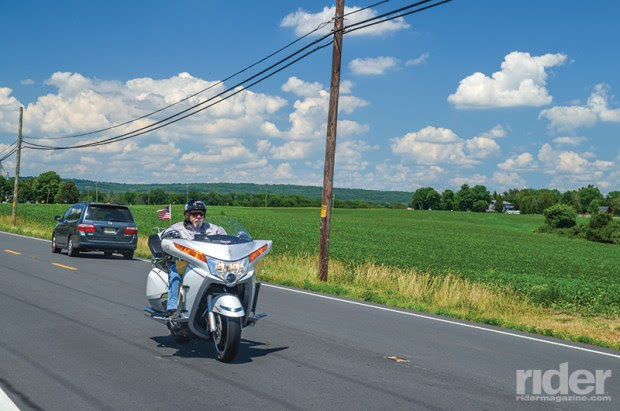 “Country roads, take me home to the place I belong” (John Denver). Joe cruises through New Jersey farmland on Route 513, happy to be “On the Road Again” (Willie Nelson).

However, we were foiled by a washed-out bridge on Route 32 onto a detour where we got lost, so we crossed into Jersey by Lambertville and plotted a new route we thought was faster—it wasn’t. With several road changes and more slowdowns than we liked, we realized Route 519 is preferable. Nevertheless, overall the route was a good one, cruising through farmland, forest and quaint small towns. 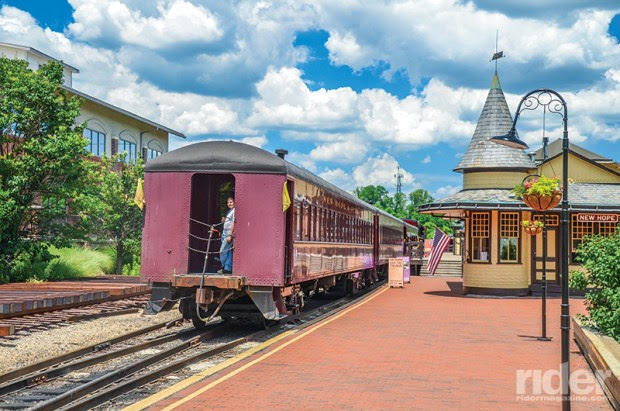 Scenic train ride into the countryside gets ready to depart: “All aboard, who is coming aboard?” Passengers take a step back into the days of yesteryear as they roll by family farms, historic sites and villages.

By the time County Route 517 connected with State Route 23, we were ready to blast off on this curvaceous rolling road that was devoid of traffic heading south. Even though our return trip had not worked out exactly as planned, Joe and I had still had a great time and traveled some new roads as well. It gave us even more choices the next time we feel a hunger to take a kool kruise to a hip town: New Hope. 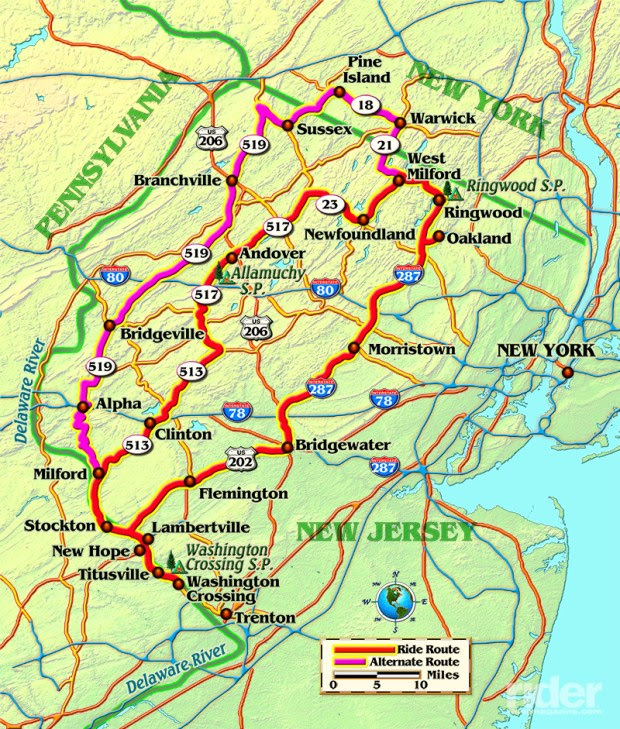 A map of the route taken, by Bill Tipton/Compartmaps.com.