Church Of MO King Of The Road Burners

Church Of MO King Of The Road Burners:

Recently, our own John Burns traveled to Daytona to hitch a ride aboard the alphabet soup that is the 2017 Harley-Davidson Road King Special FLHRXS. In his story, JB noted the Road King made it’s debut in 1994 – the same year the very site you’re reading right now was born. With that in mind, this week’s Church feature goes back in the vault to 1996 and the earliest story we could find about the Harley Road King in the MO archives. In reading Tom Fortune’s review of the Road King, the bike sounds antiquated even when it was brand new. Though some might scoff that today’s Harley’s haven’t changed, if Tom Fortune could ride the 2017 Road King, he’d be blown away by its fit and finish. It’s definitely interesting to see where we’ve come in the last two decades. Read on to take yourself back in time.

King Of The Road Burners

Harley-Davidson started Motorcycle Touring, many years ago. For many, hitting the road on a Harley remains pure Americana. Unfortunately, over the years the market for large touring rigs has been moving toward the upper end of the price scale, and Harley’s offerings were no exception to this trend. Until the introduction of the Road King; at around about $15,000, it’s actually cheaper than some big Japanese tourers.

Consider the Road King, Harley’s middleweight tourer; their retort to the big-money big rigs. It is not complex or flashy. Visually, the Road King’s styling radiates Harley nostalgia: skirted fenders, sweeping highrise handlebars, burly headlight with chrome nacelle, all flanked by twin driving lights. Motorcyclists who crave the latest in electronic technology are seldom the owners of Harleys. Although the Electra Glide, the FLHTCU, has offered cruise control and a passenger adjustable radio for many years, Harleys have traditionally been refugees from the gadget-strewn world of heavyweight tourers they’ve pioneered. But for ’96, Harley is offering an option on the Road King that truly brings modern touring performance to the Evolution Big Twin, and we’re not talking about the new electronic speedo. Electronic Sequential Port Fuel Injection (ESPFI) was first seen on the 1995 FLTCU Tour Glide models, and Harley will offer ESPFI on all touring models this year. 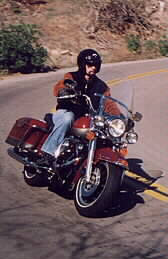 And boy, what a difference it makes. This was the most tractable V-Twin Evo we’ve ever had the pleasure of riding. Harley maintains a few of the benefits of the new Weber fuel injection system include a 10% increase in torque, easier cold starts and smoother idle at all temps and altitudes, and lower exhaust emissions. The electronic system also contains on-board diagnostics that assist mechanics with troubleshooting and maintenance. Compared to a carbureted Evo, the injected version is an absolute pleasure to use. No choke required (and none is fitted) — just thumb the starter button, and in half a second, after the starter works its way over the compression hump and finally spins the engine, it roars to life, settling into a nice smooth idle with instant drive away – no coughing, no backfiring. No problem.

Riding the ‘King, you never doubt you’re on a machine of formidable substance. Nothing may be done quickly or halfheartedly. Each shift is an event; the clutch must be yanked in, the chrome heel/toe shifter prodded with sustained, decisive force. Harley riders know the feel. Vibration from the Big Twin is effectively controlled by Harley’s patented isolation-mounting system. Although not totally isolated from vibration at idle (sitting aboard the Road King at traffic lights, you can watch the motor bouncing around in the frame), the rubber-mounting system performs brilliantly at all engine speeds above it, and the FI system delivers spotless throttle response. 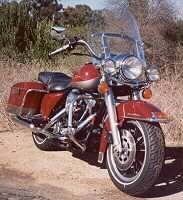 The Road King’s 80 cubic inch pushrod motor may be ancient by motorcycle standards, but it’s transformed into a modern powerplant with the ESPFI system, pumping out 83.0 ft-lbs of torque at 3500 RPM. Roll-on the ‘King, and you’re instantly rewarded with strong midrange power, pulling smoothly and cleanly away from any traffic anomalies. Lacking any top-end punch though, there is no need to rev out the RK; riders unaccustomed to Harleys have to alter their sense of speed and riding style to fully appreciate the injected ‘King’s power delivery. As wonderfully smooth as the engine may be, there is low speed chatter/choppiness over uneven surfaces from the firm air-adjustable suspension, delivering a harsh ride on anything other than smooth pavement.

Rain grooves or other longitudinal features in the tarmac also tend to steer the OEM Dunlops off course and set up a wiggle in the front end. Apply a little more throttle, though, and that low speed choppiness smooths out to surprising suppleness. As speed rises, suspension action improves. In fact, we were amazed at how well the Road King performed on twisty roads (but then we remembered that this model is descended from the Electra Glide Sport). Decent ground clearance, coupled with a low center of gravity, wide handlebars, narrow profile and grippy rubber can make for fun times when the touring path deviates from the Interstate. The dual front discs perform well under duress; the master cylinder has been redesigned for ’96, resulting in a cleaner look while providing reduced lever effort of 10-15%. The rear brake required a little higher effort then we’d like, but overall performance was acceptable, and the combination of three discs performed well. 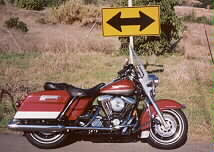 Touring with the Road King brings mixed blessings. We found the capacity of the removable saddlebags to be close to the standard of those on other middleweight tourers, but finish and basic design are not. The lids were clumsy to operate, and the bags have no handles, so removing them to take them inside a hotel is awkward. The seat, overall fairly wide and plush, is surprisingly narrow at the front and offers little support for the rider’s thighs, and shorter passengers must stretch over the saddlebags’ crash bars to make contact with their floorboards.  Addressing the tall, wide handlebars places the rider in a sort of alert yet relaxed cruiser posture, but forces your arms too far apart, quickly causing discomfort mid-back that shortens the amount of time you could spend in the saddle. Which is unfortunate because the excellent fuel mileage from the injected Evolution mill coupled with a windscreen that provides ample coverage from wind blast everywhere above the knees could have made the Road King a serious long-distance touring candidate.

The Road King’s strengths lie in short-to-medium range day or overnight tours. The smoothest running Harley ever, it’s a motorcycle for a certain type of riding and rider, more suited for slow-paced touring life. Harley have re-invented Motorcycle Touring. We found the ‘King to be a relaxed, friendly mount for browsing the scenery as the miles roll by.

Church Of MO – King Of The Road Burners appeared first on Motorcycle.com.