Showing posts from August, 2017
Show all

Top 10 Reasons To Wear Motorcycle Gear : Regular Motorcycle.com readers know that we are big proponents of wearing proper motorcycle gear while riding. We think wearing anything else would be foolish. (Yes, we’re looking at you t-shirts, shorts, and sneaker-wearing riders!) Rationally, we all know that, in a crash, the best thing to be wearing is durable gear – if we want to minimize the potential for injury. Unfortunately, a lot of riders have an unrealistic view of their chances of going down. Hey, I understand. During my first few months on a motorcycle, I wore a jean jacket – which is just slightly better than nothing. Since then, I’ve always worn the best gear I could afford. The good news is that rider protection technology has come a long way in recent years. You don’t have to buy expensive leather to be sure you’re protected from the slings and arrows of abrasive pavement. What follows is a list of reasons why you should consider buying – and wearing – dedicated motorcycle p
Post a Comment
Read more

Head Shake – Bad Azimuth : Too long a sacrifice can make a stone of the heart. -W. B. Yeats, Easter , 1916 Reading the headlines, I see they empaneled another grand jury several weeks back. Man, that is some large caliber shit isn’t it? Billionaires, grand juries, Russians, huh, wild. Hope it was all worth it. And now there’s three dead in Charlottesville. I’m thinking about a cabin outside Grant, Colorado, up some creek and a dirt drive that wanders up some nameless mountain out there. Place had an old cook stove in it, big ass woodstove that did double duty as an oven and range, big fucker. And I woke to an old WWII/Korea-era Marine in his tighty whities standing at it pre-dawn with a cast iron skillet the size of Delaware frying up some eggs and elk sausage; Willie cooking breakfast for a half dozen guys. Willie could probably do a lot of things well, hunt elk and ride were definitely two of them, pretty good cook too judging by the two steaks-a-piece he served up for everyone
Post a Comment
Read more

Best On-Off-Road/Adventure Motorcycle Of 2017 : Best On-Off-Road/Adventure Motorcycle of the Year Winner: KTM 1290 Super Adventure R By Sean Alexander The “Best” bike in this category could be quite an elusive target. Who is asking? Is “best” the best bike in hardcore eastern Enduro settings? The best two-up on the interstate? Best at hitting some sweet jumps? Best at attacking a twisty mountain road?  You see, every observer is going to mix their pavement and dirt a little differently, so no single on-off-road capable bike could really be the best for everyone. Understanding that, the ultimate “BEST!” On-Off-Road/Adventure motorcycle available in 2017 is unquestionably the KTM 1290 Super Adventure R! ( Your mileage may vary, void where inhabited by short people, consult a Dr. for erections lasting more than five or six years. ) 2017 KTM 1290 Super Adventure R First Ride Review Despite its formidable middle-500-pounds curb weight and a rear rack that is somewhat unfortunately shap
Post a Comment
Read more

Best Lightweight/Entry-Level Motorcycle Of 2017 : Best Lightweight/Entry-Level Motorcycle of the Year Winner: KTM 390 Duke By Kevin Duke It’s easy for moto enthusiasts to fall in lust with pricey motorbikes, but it’s much more difficult to feel ardor for inexpensive machines – plastic and steel just isn’t as intoxicating as billet and carbon fiber. But that’s why KTM’s 390 Duke is such a special motorcycle. 2017 KTM 390 Duke Review First off, it’s a rather striking-looking conveyance for something that retails for just $5,299, with its chro-moly trellis frame and sharp bodywork looking far more exotic than any bike retailing for less than 7 or 8 grand. Then add in niceties surprising for its class like a radial-mount brake caliper, LED headlight, inverted fork, slipper clutch, aluminum swingarm and standard ABS – making everything else in its price class look decidedly cut-rate. Now, that wouldn’t amount to anything if not for a riding experience that is sure to put a grin on any
Post a Comment
Read more 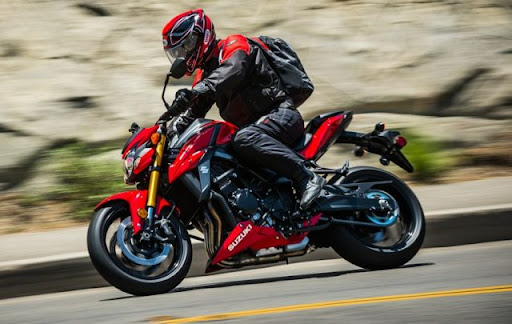 2018 Suzuki GSX-S750 | Road Test Review : New bodywork, instrumentation and lighting is influenced by the GSX-S1000 and gives the 750 a sharper look. For someone who lives and breathes sportbikes, there is no substitute for their combination of high-revving power, razor-sharp handling and light weight. The high initial cost, more expensive insurance and uncomfortable seating are irrelevant to a rider who just has to have the latest and fastest racebike-with-lights. For many of us, though, once you’ve had a fling with hypersport performance and the realities set in—mainly that you don’t really need race-winning capability for strafing the canyons on weekends—a cheaper, more comfortable sport standard-style bike can be a better alternative for the long term. With a higher, tubular handlebar that can be easily replaced with a different bend, somewhat lower footpegs and generally more relaxed seating—not to mention a lower initial cost and cheaper insurance—you can enjoy blistering the co
2 comments
Read more
More posts